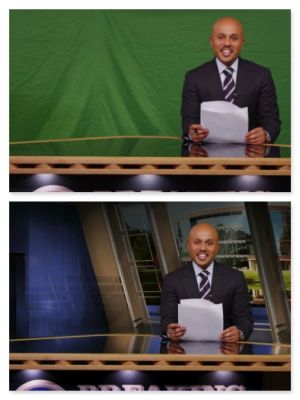 The Red Scarlet Camera not only changed the way DP's shoot... it changed the way editors edit. The ability to shoot 4k on production cuts our shoot time in half and changes the way we plan and execute productions. Everything from color correcting to reframing... to getting the most from a green screen shoot – ASV is capitalizing on those advantages.

Gone are the days of steaming the green screen and making sure the lighting of the background is flawless. With the Red Camera, our editors are capable of taking any type of green screen backgrounds to create a whole new world.

One of our ongoing "news format" projects for a major Pharmaceutical client, allows us the opportunity to have some fun with creating those worlds. ASV's Senior Editor, Nathan Courtney, describes working on this project as "a fantastic creative opportunity for me. The 4k resolution leaves one unhindered in pursuit of a clean key."

Nathan adds, "These new advancements in technology have allowed production companies to really tap into their creative." ASV is looking forward to experimenting some more and really blowing away our clients. 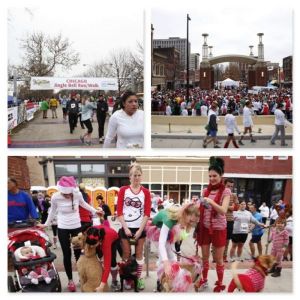 In cities across America, runners are 'jingling while they run to raise funds to find a cure for Arthritis. ASV Productions was hired by the National Arthritis Foundation to help capture the commitment, the hope, and the fun for participants at a Jingle Bell Run.

With a crowd of over 2,000 people at our first stop in Knoxville, it wasn't hard to get in the spirit. The following weekend, we boarded a plane to Chicago in the hope of getting some of the white stuff... and though we missed the snow by a few days, we did meet some very passionate Jingle Bell Run participants and found our way to some of the cities' famous deep dish pizza.

ASV's DP Aaron Stecker stated "Having a jib op at the start line of the race made for some incredible footage. Paul Huth did an incredible job assembling the jib in the dark at 5 in the morning. Mark Zurawiec, our go-to jib op in Chicago, made even the rainest of days look appealing!"

These family and pet friendly events encourage participants to get dressed up in their craziest holiday garb and brave the December elements wherever they are. Visit www.arthritis.org to find out more about the Jingle Bell Run and check back at asv.com to see a video glimpse of the events. 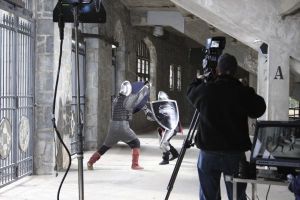 Video on the Cutting Edge

Slicing through a slice of history through the keen eye of the RED Scarlet camera, Director of Photography, Aaron Stecker, takes a chance by going handheld and up close with the two battling swordsman. Oglethorpe University provided the perfect backdrop for this centuries-back-in-time travel to the medieval renaissance to recreate dueling knights in an epic battle to the finish... to prove the durability of the armor-like finish of this wood floor manufacturer's product.

"The interesting part about it – was getting lost in the action. When the camera happened to catch a car going by in the distance... it would throw me right out of the time period and I'd remember what I was doing. It was so realistic shooting through the eye of the Red," recounted Aaron Stecker, Director.

Election Night Coverage with CNN From the barstools of Manuel's Tavern to the booths of Hudson Grille – ASV was there with CNN Promotions Producers to capture Atlanta voters tuned to CNN and checking their CNN apps for election night results.

ASV's Lauren Dragona was on site as a camera operator and recounted, "Election night at Manuel's Tavern was a great night to get every day people watching CNN and using their electronic devices to get real-time updates on the election results. The Atlanta voters were happy to help CNN by volunteering to look at their phones, laptops, or tablets and all were engrossed in the TV screens tuned into CNN"

Whether their candidate won or lost... CNN captured audience member's attention at these local popular establishments and won the day... and ASV was there. 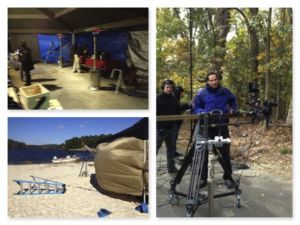 ASV and the Castaways

Forty-degree temperatures and forty mile an hour winds made for brutal conditions and calls to emergency power and heat suppliers to keep the forty-plus cast and crew, including ASV Productions' Producers, Director, Camera Operators, Audio Engineers and Makeup Artists warm enough to pull this recent shoot off at Stone Mountain Park the week Hurricane Sandy wreaked havoc up and down the east coast. The task at hand was to parody an iconic comedy TV series ... but the reality was no joke that week.

"We lost tarps... had some equipment damage, and it was the closest I've ever been to calling a shoot because of hazardous conditions," ASV Director Aaron Stecker stated. "The hardest part was working with the cast to help them through line delivery as they fended off the cold, wind and sand... while at the same time, dealing with flying equipment, props, and natural debris. The talent was amazing on set, despite not having feeling in their fingers and toes."

The shoot and the final product would have been severly lacking without the help of Scott and Sue Feldman from Atlanta Props. They created and built a bamboo boat, among other props, that floated with 8 of the talent on board of it.

At the end of the three-day, four-camera shoot... 72 gallons of coffee and hot chocolate had been drank, 12 propane tanks were used for the heaters, one, very last minute, tent rental was placed, all so we could caputuer 13 hours of footage. The brave cast recorded about five cases of near-hypothermia, and the crew would call it among the most brutal shoot conditions of their careers.

In the final analysis, ASV crew decided, if you had to be stranded on a deserted island, you'd want to do it with this group of favorite clients... because we sure had a good time. Check out our album of fond memories of this one at asv.com/portfolio/photoGallery.php